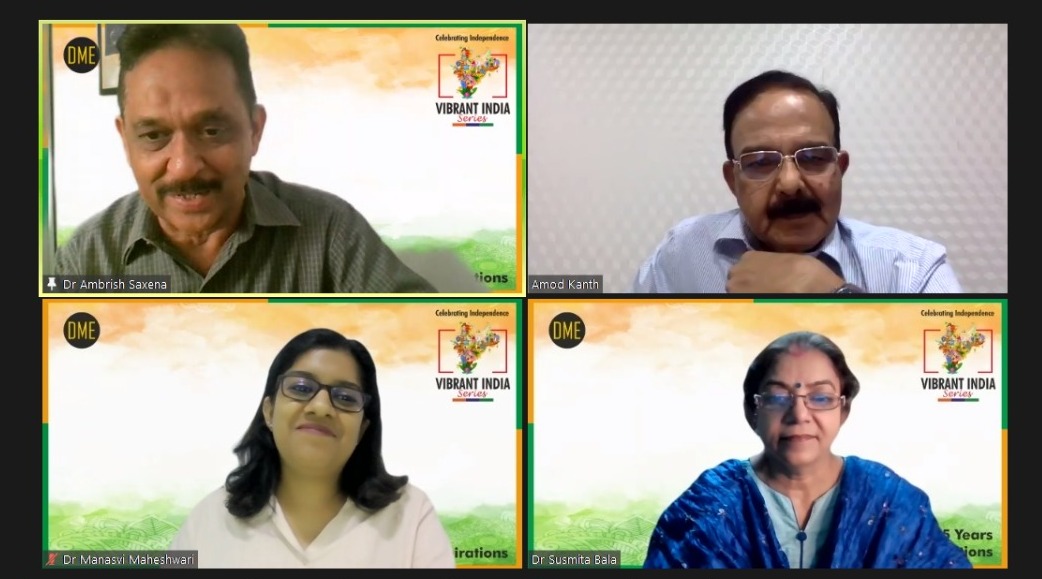 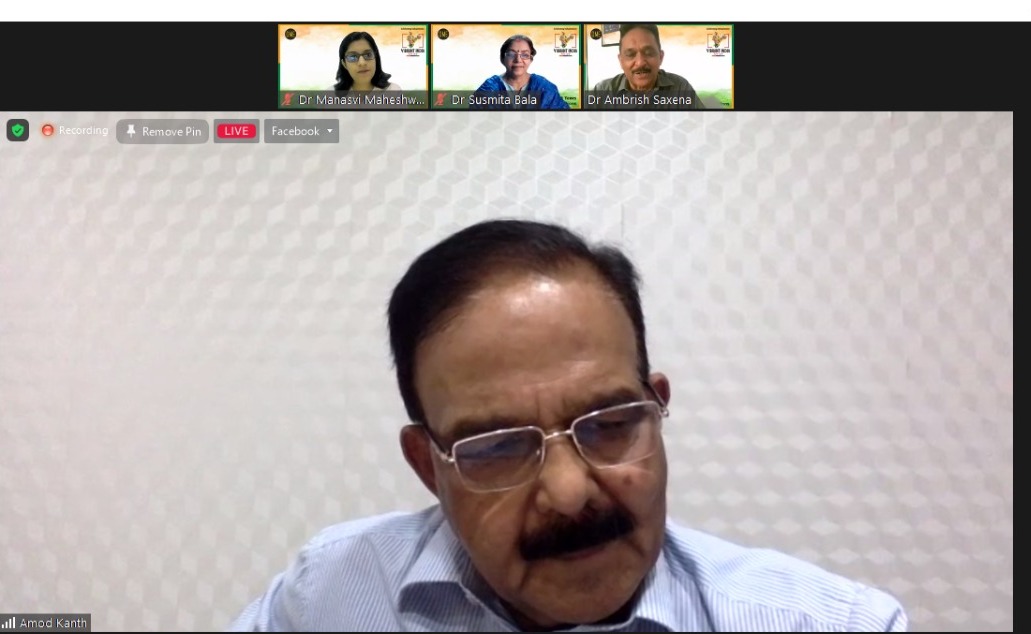 One of the faculty members, Dr Manasvi Maheshwari and a student – Khushi Srivastava introduced Mr Kanth, beginning his policing career to raising a national level humanitarian organisation – Prayas JAC Society and bringing in transformation in the lives of marginalised children, youth and women. A Distinguished Former IPS Officer of AGMUT Cadre and having been an Ex-Chairperson – DCPCR. Mr Kanth worked on combating terrorism operations including many challenging tasks in his police career and also working for social groups simultaneously.

Dr Sushmita Bala, the Head of the Department of Media School, welcomed Mr. Amod K Kanth to their institution virtually saying, “It’s a matter of great pride to welcome Mr Amod Kanth. Mr Kanth is working in varied fields despite being a police officer. His career has been applaudable. Prayas has done exceptional work for children. Listening to Mr Kanth, students will gain from his experiences”. And introduced him to Vibrant India Series, there initiative celebrating Azadi Ka Amrit Mahotsav.

Speaking to students, Mr Kanth said, he has lived several lives together. He said, “I have lived parallel lives, deeply interacted with variety of people. When I look at youngsters today, I tell them how I have combined my parallel lives, the different lives that I have lived. When I was in the police career and social worker. During my challenging policing career and in 1988, Prayas was created”.

Mr Kanth said, “With this my different lives began, life of a policeman and life of a social worker. Combining these two together have been difficult. My dilemma of leading two different lives. My entry into police was of a reluctant cop as I wanted to be a teacher”. Mr Kanth motivated students saying, he had phobia of examinations and always used to run away from examinations at times. He said, “I thought, I was bad in studies and because of this I lost one year and despite this I scored the highest marks”.  Mr Kanth shared how he became the officiating principal in Chaibasa and during those years Naxalism was taking roots”.

He shared with students that his role as police officer was challenging and eventful and his memoirs, ‘Khaki in Dust’ was recently published. Sharing his career’s key cases and political assassinations during his tenure which he investigated. He shared some of the challenges as a police officer and he emphasised on keeping his values all through his career which percolated in his actions. As he always said, Prayas has been a chance creation and he during his interaction with students and faculty, recalled a phone call that he received during 1988 when a massive fire broke out at Jehangir Puri slums and then LG of Delhi, Air Marshall Kapoor called him. The massive fire that gutted slums of Jehangir Puri in Delhi led to devastation in the lives of people. The destruction of homes and homeless children, families led to creation of Prayas operating from a small premises.  He enlightened students who listened with attention about the stakeholders that later joined hands of Prayas and spoke about the journey of Prayas and his parallel life that kept going with Prayas and his police career.

For youngsters who in few years will begin their careers, he shared that being an ethnographer of Prayas’ journey, he can for sure share few words of wisdom. He said, “Growth of Prayas is not extraordinary, extraordinary is our efforts. I had no money at all. But today with rigorous efforts in function, we have been looking well after our children – their feeding, clothing, education and health”. This is just one anecdote but overall, Prayas has been bringing in change in numerous lives. The kind of activities of Prayas has brought repute to the organisation. Today we are working in ten states and engaging people and changemakers at grassroots.

Dean of Media School, Dr Ambrish Saxena interviewed Mr Kanth, asking few questions on importance of examination, why students must take their studies seriously and requested Mr Kanth to share his experiences. His second question was on encounters and masculine policing as youngsters present will in a year or two will enter into their journalistic career. Answering his first question, he motivated students, sharing that he was a Hindi medium student and he learnt English in the remotest region of Bihar, India. Mr Kanth, with sincerest regards, recalled his teacher, Avdesh Sir, who was a great orator in the history department, from whom he took motivation. Bringing in recency, he said New Education Policy 2020 is going to turn around education in India. Classroom and textbook are not an end. Dr Saxena’s second question on masculine policing and encounters, to which Mr Kanth reiterated what Hon’ble Supreme Court has said, “Its plain murder”.  Mr Kanth said, he did not allow a single case of encounter. Incidents may occur but there is nothing valuable than the Constitution.  The Constitution is beacon of light. Again, bringing students to centre, Founder General Secretary of Prayas JAC Society said, “Country has contradictions, all you can do is to extend a helping hand. We are 4th or 5th largest economy and a military power. Despite this, there is a marginalised population. You all can extend help to those at margins. Be conscious of your surroundings. Don’t close your heart. Be empathetic.

Students of Journalism asked Mr Kanth, about any pressures that he faced during his career, to which he responded that politicians influence but only thing is to follow Constitution. As Constitution is our holy book. He was asked about the impediments and difficulties in careers – whether policing or social service. To which he responded, in policing, we follow law in entirety. As it has been said, Law is both a weapon and also a shield. Whereas being a social worker has been difficult, carrying a begging bowl at times makes people avoid us.